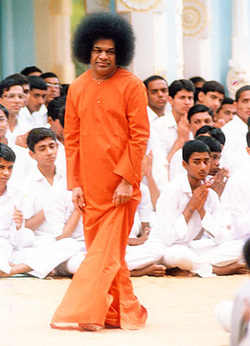 Who is Sri Sathya Sai Baba?
Sri Sathya Sai Baba was born on November 23, 1926 in the village of Puttaparthi in Southern India. He has established his Ashram there which is known as “Prasanthi Nilayam” or “The Abode of the Highest Peace”. Millions of spiritual seekers visit the Ashram every year to receive his Divine
blessings.
As a child, Sri Sathya Sai Baba demonstrated the qualities of compassion, wisdom, the desire to serve others and great respect for elders. He also displayed remarkable miraculous powers and knowledge, and talent in drama,
music and dance. He could quote from and discuss the spiritual texts without ever having studied them. As the early age of fourteen, he left his brother’s home where he lived and declared that he had work to do and that his devotees were calling him. He has declared his Mission in the following terms:
“I have come to light the lamp of Love in your hearts, to see that it shines day by day with added lustre. I have not come on any mission of publicity for any sect or creed or cause, nor have I come to collect followers for my doctrine. I have come to tell you of the Universal unitary faith, the path of Love. Believe that all Hearts are motivated by the One and Only God, that all names in all languages and all forms man can conceive, denote the one and only God. Cultivate the attitude of oneness between people of all creeds, all countries and all continents. This is the message of Love I bring.”                  -Sai Baba- 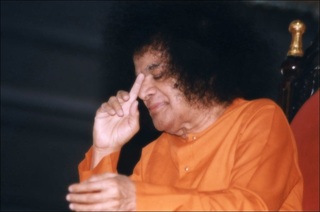 Sri Sathya Sai Baba
Sathya Sai Baba -- His Works Sathya Sai Baba is a highly revered spiritual leader and world teacher, whose life and message are inspiring millions of people throughout the world to turn God-ward and to lead more purposeful and moral lives. His timeless and universal teachings, along with the manner in which he leads his own life, are attracting seekers of Truth from all the religions of the world. Yet, he is not seeking to start a new religion. Nor does he wish to direct followers to any particular religion. Rather, he urges us to continue to follow the religion of our choice and/or upbringing.

Sathya Sai Baba publicly declared his mission in 1940, at the age of 14. Since then, he has daily exhibited in practical and concrete terms the highest ideals of truth, right conduct, peace, love, and nonviolence. He has often stated, "My life is my message." Each day, hundreds of pilgrims make their way to the tiny hamlet in southern India where Sathya Sai Baba's ashram (spiritual headquarters) is located. They come not only from India but from virtually every country of the world. Over the years, followers have organized to foster the construction of a variety of buildings and facilities to house and otherwise accommodate the ever-increasing number of visitors. The name of Sathya Sai Baba's ashram is Prasanthi Nilayam, which means "abode of the highest peace".

Sathya Sai Baba interacts with all people on a heart-to-heart basis. There are no intermediaries between himself and those who yearn for knowledge and experience of God. Every day for more than 50 years, Sathya Sai Baba has walked among and talked with the spiritual pilgrims who gather around him in increasing numbers. He offers solace and inspiration to all sincere seekers of truth.

Education. Sathya Sai Baba places great importance on proper education for young people. Parents and community leaders are urged to concern themselves with the informal as well as the formal experiences to which their children and young adults are exposed.

He has established a model education system, which includes primary schools, secondary schools, and an accredited university with three campuses, offering undergraduate, Masters, and Ph.D. degrees. No fees are charged to students, and admission is open to all, regardless of race, religion, or economic condition.

In addition to emphasizing the pursuit of academic excellence, Sathya Sai Baba's system of "integral education" is designed to foster self-discipline and pro-social conduct. Students are required to take courses on morality and spirituality and to devote several hours each week to some form of community service. Sathya Sai Baba says that "the end of education is character".

Health care. In 1991, Sathya Sai Baba built an ultra-modern 300-bed hospital close to the university and ashram. Highly specialized operations, including open-heart operations and kidney transplants, are performed routinely. There is absolutely no charge to the patient for professional or hospital expenses. Motivated by the desire to serve humanity, doctors, nurses, and workers in the hospital render extraordinary, compassionate, and loving care to all patients. A second "super-specialty" of roughly the same size was inaugurated in 2001. These hospitals have been called "temples of healing", for their medical care in a spiritual atmosphere that is devoid of commercialism.

Service to those in need. Recently, Sathya Sai Baba initiated a project to provide an adequate supply of pure water to 1.5 million inhabitants of the State of Andhra Pradesh (India) who were living in drought conditions. The Prime Minister of India traveled to Prasanthi Nilayam (Sathya Sai Baba's main ashram) in order to inaugurate the project. Sathya Sai Baba demonstrates that it is the duty of society to ensure that all people have access to the basic requirements for the sustenance of human life.

Sathya Sai Baba has given his life, selflessly and magnanimously, to the service of mankind.

Sathya Sai Baba & His Message:   Sathya Sai Baba encourages us to recognize who we are. We are not these minds. We are not these bodies. We are the eternal spirit that temporarily occupies these minds and bodies. We can appreciate and become who we really are by turning inward with faith in God and an intense yearning to know Him. Our conscience is a reflection of the eternal spirit. Sathya Sai Baba tells us that our conscience is our master. When we follow our conscience, our thoughts, words, and deeds will be noble and consistent. Spirituality is having the courage and determination to follow our conscience in all things and at all times. In doing so, we recognize that we are all united in God. We are bound together by divine love.

I have come to light the lamp of love in your hearts, to see that it shines day by day with added luster. I have come to tell you of this universal, unitary faith, this spiritual principle, this path of love, this duty of love, this obligation to love. Every religion teaches man to fill his being with the glory of God and to evict the pettiness of conceit. It trains him in the methods of unattachment and discernment, so that he may aim high and attain spiritual liberation. Believe that all hearts are motivated by the one and only God; that all faiths glorify the one and only God; that all names in all languages and all forms man can conceive denote the one and only God. His adoration is best done by means of love. Cultivate that attitude of oneness between men of all creeds and all countries. That is the message of love I bring. That is the message I wish you to take to heart.


Sathya Sai Baba: Let the different faiths exist, let them flourish, and let the glory of God be sung in all the languages and a variety of tunes. That should be the ideal. Respect the differences between the faiths and recognize them as valid as long as they do not extinguish the flame of unity.


Sathya Sai Baba - The Essence of His Teachings:
At the age of 14, Sathya Sai Baba declared to his parents that he had come to this world with a mission to re-establish the principle of Righteousness, to motivate love for God and service to fellow man. Since then, he has consistently called on all mankind to Love All, Serve All and has repeatedly asserted that the essence of all scriptures is Help Ever, Hurt Never!

Through his speeches and writings, Sathya Sai Baba has offered a veritable ocean of knowledge and guidance on all aspects of spiritual, religious, and value-oriented living. He has often repeated that it is not necessary to drink the whole ocean to know its taste, that it is not necessary to read all scriptures to live a life of joy, peace, and love. It is enough to put into practice one aspect of spiritual teaching.

Sathya Sai Baba says that we are all embodiments of God —we are God— and that the chief goal of our lives as humans is to realize that we are God, to experience that we are Divinity, to achieve "enlightenment". Sathya Sai Baba said in 1953 that, "there is no escaping it; all creatures have to reach God some day or other, by the long route or by the short route.” And he mentioned this topic of realizing who we really are in almost every one of his 1500-odd published discourses.